Review: There May Be A Castle by Piers Torday 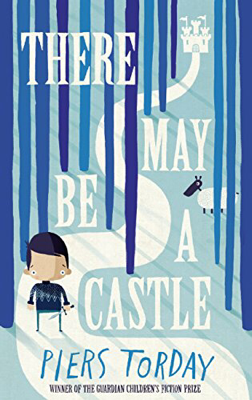 As Mouse and his family set off to see the grandparents at Christmas they slide of the road and have a serious accident in the snow. Mouse who has undone his seatbelt is thrown out of the car. When he wakes  up he cant see his family or the car. But he meets a sheep and a large and talking version of his toy horse. Mouse appears to be in a different world, as if in one of his daydreams. Nonky, the horse tells him they have to go and find the castle and fast. So their journey to find the castle begins... Mouse doesn't appear to remember anything that happened before or even his family, who are still trapped in the car. While the mother is unconscious, Violet might be the only one that can help them.

I really liked the concept and I rather got into the story at first. While it was aimed at much much younger readers then me it had me hooked. But then things got a little stranger and stranger and I found myself get detached from Mouse's story. However I really couldn't get back to Violet and the rest of them quick enough.

Towards the end I had to pay much more attention when their stories started to melt together. And let me tell you I didn't quite expect the story to end the way it did. All along I saw it going somewhere different. But I do like it when a book can make my jaw drop.

All in all this was a little to strange for me and too young for me. But I think for the younger readers it will be fantastic. It portraits a very serious topic in a unique and magical way. Its one of those stories that will make you think and will touch your heart.

Thank you to Lauren at Hachette Children for my copy.

There May Be A Castle is out now.