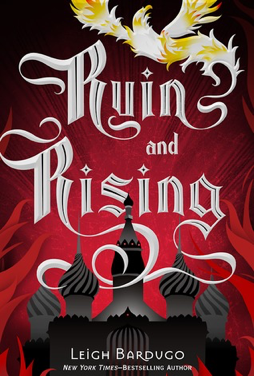 
Now the nation's fate rests with a broken Sun Summoner, a disgraced tracker, and the shattered remnants of a once-great magical army.


Deep in an ancient network of tunnels and caverns, a weakened Alina must submit to the dubious protection of the Apparat and the zealots who worship her as a Saint. Yet her plans lie elsewhere, with the hunt for the elusive firebird and the hope that an outlaw prince still survives.


Alina will have to forge new alliances and put aside old rivalries as she and Mal race to find the last of Morozova's amplifiers. But as she begins to unravel the Darkling's secrets, she reveals a past that will forever alter her understanding of the bond they share and the power she wields. The firebird is the one thing that stands between Ravka and destruction—and claiming it could cost Alina the very future she’s fighting for.

I have been almost binge reading this series. I've wanted to finish it before I start Six Of Crows. I felt that if I didn't read Leigh's Grisha series before it, I might never get to it. And I am glad I have made this decision because I really wouldn't want to have missed out on this absolute gem of a series.

While I found that it took me a little longer to get back into the story then usual, mainly due to so many different names and characters, once I was back in I enjoyed every minute of it.

Ruin and Rising is the last book in the series and what a finish it is!!! There is one huge twist I did not see coming and let me tell you I didn't know what to do with it either. And due to this I really didn't have an idea on how this could come to an end. But it managed to give us a very satisfying and to a very beautiful and exciting Grisha series.

Just like the previous two books the writing is incredible and the wold building is impressive. I have managed to connect with the characters and the story over its course and I am really sad now that this is finished. The fact I now have Six Of Crows and Crooked Kingdom to get through is a massive help. While it's not the same characters I am really happy to be going back to the same world.

This is an absolute must read and if you haven't yet read any of Leigh's books then please do start here. You will not be disappointed. I have loved every minute of all 3 books and can highly recommend it.

I will keep this one short and spoiler free because this is the last book. I have had so so much fun reading this. And now that I have started Six Of Crows I see how much sense it makes to read these first, because the events of this series are being mentioned. Fantastic books!
Posted by Aggie at 21:52