The Selection, The Elite, The One by Kiera Class 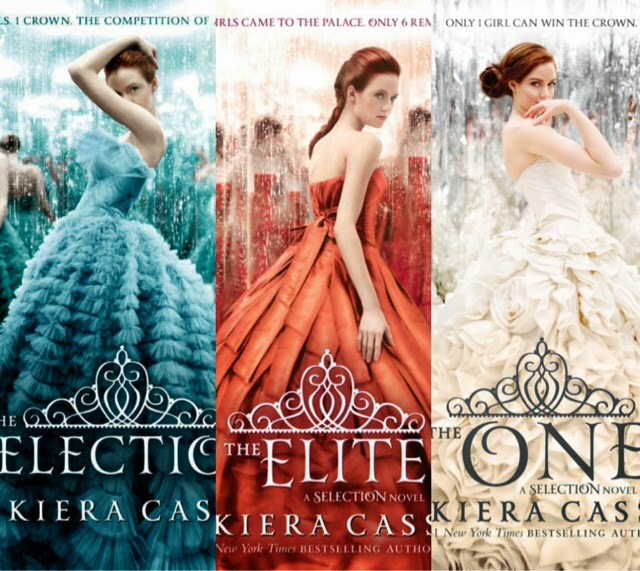 "For thirty-five girls, the Selection is the chance of a lifetime. The opportunity to escape the life laid out for them since birth. To be swept up in a world of glittering gowns and priceless jewels. To live in a palace and compete for the heart of gorgeous Prince Maxon.

But for America Singer, being Selected is a nightmare. It means turning her back on her secret love with Aspen, who is a caste below her. Leaving her home to enter a fierce competition for a crown she doesn't want. Living in a palace that is constantly threatened by violent rebel attacks.

Then America meets Prince Maxon. Gradually, she starts to question all the plans she's made for herself—and realizes that the life she's always dreamed of may not compare to a future she never imagined."

Well I am a little unsure how to start this. I have just finished the third book in this series, The One, but I haven't actually reviewed the other two. So I have decided that instead of just reviewing the last one alone, I will instead include all three books. Which makes it a bit harder because I don't want to spoil any of them.

I have seen these books around for some time, once again the covers just made me fall in love. I cant believe it took me some time to actually read the first one. By that time even book 4, The Heir, was on sale. So I am sorry I am late with this one. You probably all have read these already.

This book had, from what I could see, some mixed reactions although more positive then anything else. But some people compared it to The Bachelor tv show. Never really seing any of those tho, so that certainly didn't put me off, even though I obviously undertstand the concept of the show.
I can see where people are coming from with the comparison.


It all happens in a world where people are separated in castes, from one, being the royal family, to 8 being the very poor, hungry and forgotten people. People are born into those and are mostly unable to climb up, tho you can get degraded down. It decides what your occupation is and who you can and cant marry.

America Singer is a Five,coming from a family of artist, who earn their living by selling paintings, playing instruments or singing. They haven't got much and even have to go hungry sometimes. But none of this stops her family from being really amazing.

America however has a secret, Aspen, the boy she is in love with. The boy she wants to marry, but Aspen is a six, coming from a family of servants of sort. Being paid for helping other families with cleaning or other meagre jobs. Aspen has even less then America and when they meet in secret, in her tree house, she often brings him food and sings to him. However a girl should marry someone of her own caste or marry up. So they have been keeping their love a secret, quietly planning a future and even a wedding.

One day  the royal family announces the chance of a lifetime for a selected few girls. The Selection! The prince Maxon needs to find a bride, and their traditional way is to have girls apply, using a lottery to send a selected few into the palace to meet the prince and have him choose his future wife. This obviously being the part that compares to the Bachelor.

Not only is this the opportunity to marry the prince and become the queen one day, but some of the girls will end up in higher castes once they get further in the selection.

Of course America is totally against applying. But not only does her family want her to at least try but Aspen does too. He could never forgive himself if she didn't at least try. So she applies, thinking she will never be selected and being extremely surprised when she does.

Her world completely changes over night and even Aspen ends things with her. Suddenly she is living in a palace, is wearing beautiful gowns, has her own maids and can eat all she wants.

I love how she finally ends up meeting Maxon and I love that no matter what America is heself. And Maxon soon finds himrself smitten by her. America is completely honest with Maxon and tells him about her heart being broken but offers him her friendship.

America wants to make it through the selection to change her life, not to marry the prince but to come out in a higher caste. This could change her families life. But she never expected to like Maxon. And while the group of girls is shrinking they get closer. But when Aspen joins the guard at the palace things become complicated. Not only is she now considered the prince's property and could pay with her life if she was caught with Aspen, she also fiinds herself torn between the two boys.

These books in no way are just a love triangle kind of story. There is so much more to it. There is a lot of political drama going on, and the palace is being regulary attacked. There is many secrets that need to be uncovered, about the characters, the history and much more. These books are about friendship, not just Maxons and Americas but the ones the girls build. Its about fighting for whats right and doing the right thing. About changing the future for yourself and everyone else. And the relationship between Maxon and his father that is very complicated and unmissable. In a way its even about bullying.

I don't really want to say more about the story because I might spoil book one or two. All I can say is that I really enjpoyed these. It was an absolute rollercoaster of the heart, and even tho you might guess the end result, all the twists and turns to get there have been often very surprising. I am also kind of glad I haven't reviewed this book straight after the first one, while I did enjoy it, I felt a little like it was an intro, as if more should have heppend. But it certainly does, come the next book. I went from loving some characters, to disliking them and vice versa. Book 2 and 3 certainly kept me on my toes and I enjoyed every minute of it. I am now totally excited about The Heir, finding myself very glad that this series is still going.

Let's not forgot about those beautiful covers. Wow! Those dresses. And that's another beauty about these books. It's very girly, so many beautiful gowns and jewellery. Adorable!

So if you haven't come across these books yet, you should pick them up, they are very unique and easy to get obsessed with. Plus they will make your book case a little bit more beautiful too.
Posted by Aggie at 20:34