Olly Murs - On the Road 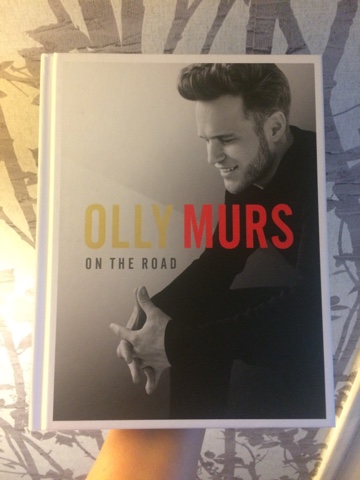 GO BACKSTAGE WITH OLLY MURS.
A REVEALING AND INTIMATE PORTRAIT OF THE ARTIST BEHIND THE HIT SINGLES AND ARENA SHOWS. TRAILING HIM DURING HIS SOLD OUT, 28-DATE NEVER BEEN BETTER TOUR INTO X FACTOR 2015, THIS IS AN ACCESS ALL AREAS PASS INTO THE WORLD OF OLLY MURS. WRITTEN FROM YOUR BUSSES, BACKSTAGE DRESSING ROOMS AND TV STUDIOS, ON THE ROAD IS THE TALE OF AN EVERYDAY MAN IN EXTRAORDINARY CIRCUMSTANCES.

Now here is my very different review and its one very close to my heart. How? Well I am a big fan of Olly Murs and as a result have met him several times. Not only that but I have been to 8 of his concerts of this tour alone and me and my friends even have been mentioned in this book.

I don't even know where to begin. I love this book for so many reasons, one being that its an amazing memorabilia. Much better then any tour program or tshirt, esp as a lover of books like me. It is packed with the set list and the list of venues and of course lots and lots of pictures. Which will be so nice to look at in years to come. I literally wish he had done this with his previews 3 tours too.

Even as a fan like me, there was so much in the book I didn't know, about Olly or the tour. Knowing what exactly goes on while he is on the road for 6 weeks was very interesting. Most of all the things us fans don't normally get to see.

Starting with the preparation for the tour in a little studio, where him and his band can rehears all his songs, to the next stop where they get to rehears the show on the actual stage, to going on the road and all the adventures they have while on the road.

You not only get to see what goes on but Olly very openly speaks about everything that's on his mind. How if feels to be on stage, how the success has changed his life, how his friends and family deal with it and of course how he feels about his fans. He even opens up about his girlfriend at the time. All this from someone who likes to keep his life private.

Beside his countless shows, this book also shows us how much Olly has worked to get himself fit for his tour, we go with him to his Madame Tussaud reveal and we get to hear all about how he got the X-factor job.

I must say I have smiled a lot, knowing what Olly is really like, it was so nice to read along and imagine him saying these things. Its all totally him.

I was also very pleasantly surprised about how much there was to read. Sounds silly, but his previous book was filled with so many pictures (not that I was complaining really), I sort of expected it here too. Of course it does have those too but the actual story about being on the road, does take over the pictures in this one.

Finding a snipped about my friends and me in the book was a bit strange at first. Olly calling us grumpy too. But thats what he is like, we can be grumps sometimes and you should never take him to seriously. He soon made up for his joke with a private message on twitter and at the booksignings while signing one of my friends books. Leaving a message for all of us... 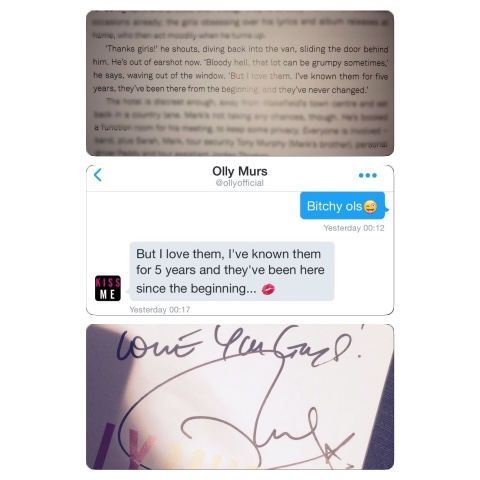 Of course at the signing I also got my own book signed and got some pictures too. Its been a really good day. I have been to a few signings of his weather it was for his album or his other book and he always makes it a lovely experience. 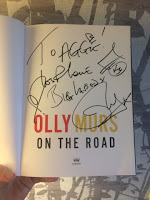 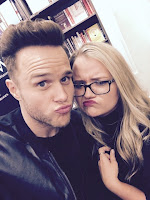 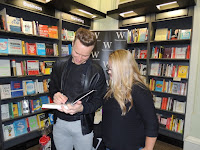 This book is an absolute must read for any Olly fan and for anyone who has been to this tour. Or even if you are just genuinely interested in what goes on backstage at a massive uk arena tour. There is no better person to show you then Olly who is totally down to earth and honest. What you see is what you get with him.
Posted by Aggie at 21:49