Ink and Bone by Rachel Caine 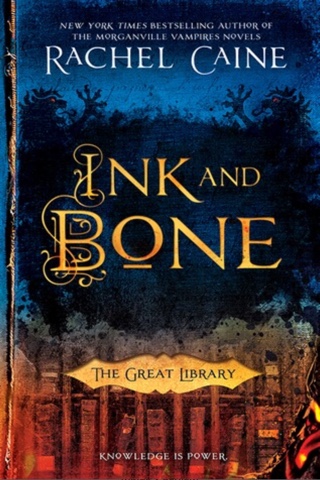 In an exhilarating new series, New York Times bestselling author Rachel Caine rewrites history, creating a dangerous world where the Great Library of Alexandria has survived the test of time.…

Ruthless and supremely powerful, the Great Library is now a presence in every major city, governing the flow of knowledge to the masses. Alchemy allows the Library to deliver the content of the greatest works of history instantly—but the personal ownership of books is expressly forbidden.

Jess Brightwell believes in the value of the Library, but the majority of his knowledge comes from illegal books obtained by his family, who are involved in the thriving black market. Jess has been sent to be his family’s spy, but his loyalties are tested in the final months of his training to enter the Library’s service.

I have been a big fan of the Morganville series. So when I heard about this new book I was very eager to read it, so much so I have downloaded it without even reading the blurb. And I hate to admit that I really struggled with this one at first.

I felt that at first I was reading words, not a story, didn't quite understand this new world I was reading about. Which confused me quite a bit and I felt like I didn't know what was going on and where this book is heading. There was a lot of characters to wrap your head around.

But while I initially struggled, once I got into the book I found it very fascinating. It's completely different to anything I have ever read before.

Imagine a world where only the Library owns original books, where you are not allowed to own any. The only way to read one is through a blank, I assume that it's almost like a tablet, but instead of powered by technology it works on alchemy. Not only that but everyone writes in their journal, through all their life. It is not legal to read anyone else's and it's almost like second nature to everyone to write down their thoughts and fears and everything that happens in their life. Once someone passes, all their life's information and anything else they ever wrote down is being stored in the library.
Basically the Library own every information there is and controls it all.

So while books are highly illegal, there is always people who want to own them, and there is a black market dealing with rare books. Jess grows up with a family of such smugglers. Since an early age he has been a runner, running the books to the buyers for his fathers business. It's a very dangerous business, being caught could mean paying with your life.

Jess' father buys him a way into the library, well that is if he manages to get through the series of test. This would mean he would work for the library, the other side. But his father wants him to be his spy, who will be able to keep him updated on books and going ons from the inside. At first Jess is not so convinced but while he goes through the tests, he finds himself more and more wanting it. But every single day he fears that he will be found out, that someone will discover what he and his family have been doing.

This is so so far from the Morganville Vampires series. It's a completely different world Rachel has created. And once I started to ubderstand it I was completely lost in the book. It's impossible to say more without going on for hours, because there is so much imagination in this story, world and characters. The characters are all very intriguing, which makes for some very interesting friendships.

The group of students find them self on countless of adventures, many of them very dangerous. They have to fight, not only to safe some very important and rare books, but also for their life's. But who can they really trust and who is really on their side? This book ain't short of secrets and lies. And there is books and books and more books...

I have long forgiven the initial struggle at the start of the book, because it has totally made up for it. I enjoyed reading this book and it's made me very hungry for the next one. And I continue to be a big fan of Rachel's work.