The Heir by Kiera Cass (The Selection #4) 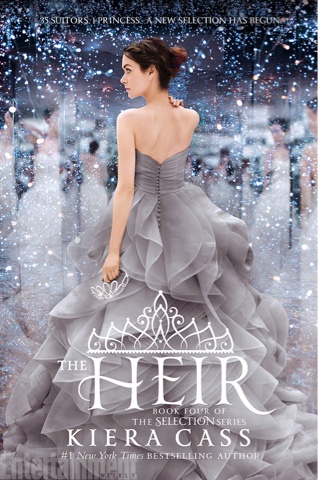 Princess Eadlyn has grown up hearing endless stories about how her mother and father met. Twenty years ago, America Singer entered the Selection and won the heart of Prince Maxon—and they lived happily ever after. Eadlyn has always found their fairy-tale story romantic, but she has no interest in trying to repeat it. If it were up to her, she'd put off marriage for as long as possible.

But a princess's life is never entirely her own, and Eadlyn can't escape her very own Selection—no matter how fervently she protests.

Eadlyn doesn't expect her story to end in romance. But as the competition begins, one entry may just capture Eadlyn's heart, showing her all the possibilities that lie in front of her . . . and proving that finding her own happily ever after isn't as impossible as she's always thought.

First impressions of the new heir to the throne are awful. She is spoiled, she doesn't want the throne and she doesn't have the ability to put her people first. And she certainly doesn't want a Selection to find a husband for herself. She would much rather want a pool at the palace, seriously, that is the first thing she would change the day she becomes queen. I understand she is still young, but really? So starting a book with disliking the main character isn't a good start.

And to be honest it doesn't really get much better after this. Through most of the book she just wants to resist getting to know the boys in the selection. She is totally convinced she won't find anyone to marry at the end of this and just hopes that after she at least plays along for 3 months, she will then be left to do what she wants.

The boys are ok, I suppose and as you get to know them some do stand out and are likeable. But nobody really grabs you and makes you fall for him.

Personally I like Kile but I don't think we get to know him enough. Neither of the boys really. Which doesn't help the book. A book is great when you find yourself a nice book friend. This one fails on this part.

I feel like Kiera should have finished this on the last book. That's where the story really ended. It just doesn't have the same appeal the other way around. She tries to up the drama by making some of the boys act out, but in no way is it even close to girl drama.

I almost feel bad about this review because I can't find anything I really like about this book. Even when the future queen starts to like the remaining selected boys, it's almost to late to start liking her.

And just like the selection, this book only seems like an intro. It's such a shame but I think my relationship with this series has now come to an end. Sorry Kiera?
Posted by Aggie at 20:33