Review: Elementals: The Prophecy of Shadows by Michelle Madow 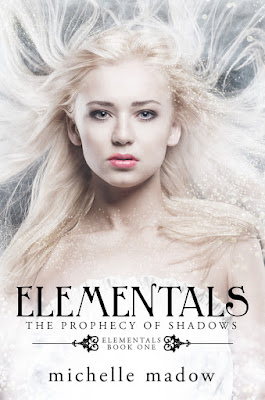 Filled with magic, thrilling adventure, and sweet romance, Elementals is the first in a new series that fans of Percy Jackson and The Secret Circle will love!

Girls who get close to Blake wind up hurt. His girlfriend Danielle will do anything to keep them away, even if she must resort to using dark magic. But the chemistry between Blake and Nicole is undeniable, and despite wanting to protect Nicole from Danielle’s wrath, he finds it impossible to keep his distance.
When the Olympian Comet shoots through the sky for the first time in three thousand years, Nicole, Blake, Danielle, and two others in their homeroom are gifted with mysterious powers. But the comet has another effect—it opens the portal to the prison world that has contained the Titans for centuries. After an ancient monster escapes and attacks Nicole and Blake, it’s up to them and the others to follow the clues from a cryptic prophecy so that they can save their town … and possibly the world.

Cover love!!! I just cant help but love a beautiful cover, still so very much guilty of that.

This Book follows Nicole as she moves to a new place and starts in a new school. Finding herself in a strange homeroom class where she is, for the first time, confronted with magic. Nicole can't believe what she is hearing. All the people in the class including her are witches, able to harness energy to turn it into magic. Magic that takes years to learn, but somehow Nicole gets the hang of it much quicker then anyone else.

All the children gather together to watch the Olympian Comet shoot through the sky. In a group with Blake, Chris, Danielle and Kate, the five experience the Comets passing with a big jolt. From that night on their powers seem to enhance. Being able to harness energy from the 5 different elements they soon discover how much more powerful they are.

The teacher eventually hands Nicole a prophecy, believing that it is about her. Together with her friends she goes on a scavenger hunt to discover more about the prophecy. They will have to work together and use their individual powers to make it through. But what awaits them at the end? And is there more to Nicole then meets the eye?

Of course there is also a boy that catches Nicole's eye, Blake, who is in a relationship with Danielle. And this is the part I don't really like. It makes cheating look a little to innocent to me. As much as Nicole is fighting her feelings, I believe both should fight them much more. Or how about the fact that Nicole's mother encourages her to go for the boy she wants weather he is in a relationship or not? This bit kind of got to me, its not something I would want to teach my children.

Other then that this has been a lovely read and a good start to a new series about magic. It was a nice, easy quick read, with a lovely new take on witchcraft. I enjoyed the character very much, a group of friends that are all very different. You can already tell that they will have many adventures together in the future and I cant wait to read about those. I wish I could dream about Blake some more, but I can't find myself to do so.

Thank you Net Galley and the publisher for allowing me to read and review this book.

This Book will be published on 26th January.