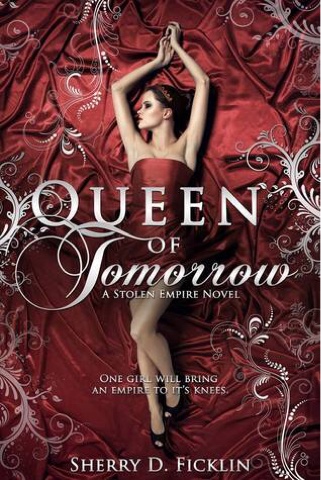 'Sophie—now Catherine, Grand Duchess of Russia—had a tough first year at Imperial Court. Married at sixteen to Grand Duke Peter, heir to the throne, and settled in their own palace, things are finally looking up. As a new day dawns, she thinks only of securing her future, and the future of their country, during one of the greatest political upheavals of her time. Fighting desperately against forces trying to depose the Empress Elizabeth and put the young Prince Ivan on her throne, Sophie soon finds herself in the middle of a war brewing between her beloved Prussia, and her new empire. But even as she navigates the fragile political landscape, she quickly realizes that she has only begun to discover the tangled web of deceit and infidelity woven over the lavish court of Oranienbaum Palace.

When a strange and delicate alliance forms between the young couple, she glimpses a future of happiness, only to see it lost in a moment at the hands of those who still seek to end her life—and prevent her reign. Out of favor with the empress and running out of options, Sophie will have to sacrifice her own innocence on the altar of Russia if she is to save the nation, and herself. To survive, she will have to do the unthinkable, betray those closest to her and become something greater and more dangerous than she ever imagined she could be… a queen.'


Considering I have stumbled upon the first book by accident and downloaded it for free on kindle, I have seriously enjoyed it. So I was very eager to start the 2nd book in the series, even tho this isn't my usual genre. But who knows this might even convert me to another genre... As if I need any more books on my tbr pile ;)

Now the Grand Duchess Catharine, Sophie is determined to be kind to her people and be ruled by her big heart. While Peter, her husband and the prince, seems to be slowly loosing his mind, and everyone already fears their country will be ruled by a mad king in the future.

Only through tricking Peter, in book 1, was their marriage consumed and instead of Peter Sophie spend her wedding night with Sergei. All that is expected of her is to produce an heir. And she finally finds herself with child, Sergei's child. But the news bring out a slightly different Peter, who up until then had a mistress which he paraded in front of everyone. But while Sophie is finally pregnant, new problems arise as the empress now decided to make a treaty with Austria instead of Germany. And Sophie will have to start plotting again to find a way to stop this.

Sophie finds herself and her unborn child in danger. And things take a nasty turn for her. The Empress also starts to show her true coulours. Once on Sophie's side, she seems now to completely stand against her. Trying to destroy Sophie's big heart in any way possible.

When Peter falls ill Sophie finds herself in even bigger danger and she needs to use her strength, intelligence and heart to not only survive put prepare a better future for herself.

Once again this book is very intriguing. Many twist and turns and surprises. And I absolutely admire the Dutches. No matter what's happened to her she is staying true to herself. Where others would have let their fate change them, she stays calm and true to her heart. She has amazing strength, where most would pack, run and hide facing even half of what she is facing, she stands her ground and always finds a way to change things for the better.

Peter is the most confusing one in this book. I have learned to dislike him after book 1 and was very surprised when he showed a slightly different side of himself, only to take another huge turn straight after.

Surprisingly it's the Empress tho that is the true evil in Sophie's life.

Of course there is also the matter of Sophie's heart. Her love, Sergei, is always by her side when ever possible. But jealousy comes into play in places. And when Sophie's first love Alexander returns to court, could Sophie's heart be swayed again? Plus there is the new addition, Grigori, her loyal personal guard, who is mostly in the background but probably my favourite new character in the series.

I adore these books. And this one certainly didn't let me down. It continues at the same speed as the first one, surprising me at every corner. A good book doesn't reveal its end half way through and this one doesn't give anything away and not only that but it leaves you wanting more. What is next for Sophie, and how will she deal with everything next. Weather you are a fan of historical fiction or not, this one is worth a read. It's not only a lovely, quick read but it is also very easy to follow. Where some historical books might put one of because we didn't know much about the history at first, with this one you don't need to be an expert. All you need to know is already written in the book. I for one am a big fan now.

Also one more thing needs mentioning... how beautiful are the covers?? I must totally admit I buy a lot of books because of their amazing covers, and this is once again one of them. So so pretty!