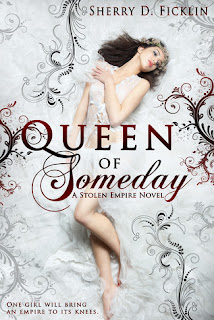 'ONE GIRL WILL BRING AN EMPIRE TO ITS KNEES...

Before she can become the greatest empress in history, fifteen-year-old Sophie will have to survive her social-climbing mother's quest to put her on the throne of Russia - at any cost.

Imperial Court holds dangers like nothing Sophie has ever faced before. In the heart of St.Petersburg, surviving means navigating the political, romantic and religious demands the bitter Empress Elizabeth and her handsome, but sadistic nephew, Peter. Determined to save her impoverished family - and herself - Sophie vows to do whatever is necessary to thrive in her new surroundings. But an attempt on her life and an unexpected attraction threatens to derail her plans.

Alone in a new and dangerous world, learning who to trust and who to charm may mean the difference between becoming queen and being sent home in shame to marry her lecherous uncle. With traitors and murderers lurking around every corner, her very life hangs in the balance. Betrothed to one man but falling in love with another, Sophie will need to decide how much she's willing to sacrifice in order to become the empress she is destined to be.

In a battle for soul of a nation, will love or destiny reign supreme?'


I have stumbled upon this by accident, I liked the cover and it was free on amazon... so why not ey? It is not normally my genre but I am a sucker for a beautiful cover. It is a lovely quick read,  a nice read in between some bigger books, when one hasn't got much time. I was however pleasantly surprised. I couldn't put it down. It slightly reminded  me of the reign at first, which also has a queen that is clever, brave and has a big heart. You can't help but like her and root for her in everything she does. But the Prince was a surprise, he will show his true colours more and more through the book and my feeling towards him have changed a lot between the start and the finish of the book. The princess is really quick in giving her heart away which gives you a slight whipflash. It's a big step up from your usual love triangle that happens in so many books these days. It's almost a little like a soap opera, in a castle, with princess and queens thrown in. However it never gets boring, lots of love, twists, intrigue, lies and much more. Will certainly return to the writer and read the other books in this series. Esp because I have grown to like the main character and I can't wait to find out what happens to her next, where will her heart lead her and what else will be thrown in her way to becoming the queen?
Posted by Aggie at 15:15