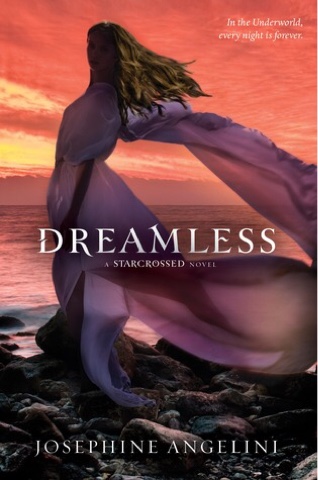 'Tasked with descending to the underworld and killing the furies so that the Scions can stop fighting amongst themselves, Helen must endure hellish torture whenever she goes to sleep - she wanders around the various levels of hell with no idea how to complete her task, and she's beginning to suffer from extreme exhaustion. Helen carries on with her mission, and for the first time meets another person down in the shadowy underworld: Orion, descended from Adonis and with the power to control desire, he is the heir to the house of Rome and an outcast. He's also kind of hot. Confused by her conflicting emotions but glad to have an ally in hell, Helen begins to realise the enormity of her task...'

Oh wow I don't even know where to begin. Wow this was hard work. Really really hard work. I was reading and reading and reading and I didn't feel like I was getting anywhere and the story was just going on and on. One thing I found very hard in the first book was understanding the Mythology part of these books. And I think it got harder and harder with the second book. There was random people, myths, fates and other things thrown in here and there and I didn't understand much of it and I couldn't keep up.

So they discover Helen can travel into the underworld in her sleep, which is a rare power between the demigods. The underworld is where the Furies are, who cause members from different houses to kill each other, because of a blood dept from thousands of years ago. And after loosing Hecter to another house, after which he can't be near any of his family, Helen decides that she needs to find the Furies in the Underworld and once and for all get rid of them. Easier said then done. Not only does Helen not have any of her powers in the Underworld but she don't even know where to start looking for the Furies. Sometime she is quite literally stuck for hours. Not only that but she can't control her entrances and exits. So everytime she sleeps she finds herself back there and while she is awake she resembles the walking dead from lack of sleep and pure exhaustion. But could her visits to the underworld have even worse consequences for her?

One night everything changes and Helen, for the first time finds someone else in the underwold. Orion, who not only saves her life the first time she sees him but he also becomes her companion on her decents. Helen feels a pull towards Orion and finds herself getting closer and closer to the boy who she can't get close to in the real world because the Furies would force them to kill each other. Even more reason to find them and beat them once and for all.

And of course there is still Lucas, always Lucas. The one Helen loves but can't be with. He is still a constant in her life. He tries new ways to distance himself from Helen but will it work or will it change him forever?

Helen's heart is split between the two boys in her life. She loves Lucas but finds herself drawn to Orion too.

I am still intrigued by Helen and Lucas, I am rooting for them and always hoping they will eventually find a way to be together. And this alone is the reason I have been reading on with this book. Because I have to be perfectly honest, I was close to giving up a few times. Her endless descents into the underworld, and many of those didn't really add anything to the story. It was just that little bit to long. If this book was shortened I think that would make it easier to enjoy. But i am still a fan of the whole idea of demigods and mythology. And I like Helen and Lucas as well as her friends and his family enough to even continue with the next book. The new addiction, Orion, shakes it all up a bit and turns a forbidden love into a love triangle kind of story. In the end I am genuinely glad I have not given up and I stuck witch it till the end. And eventually I will pick up the third book in the Starcrossed series!