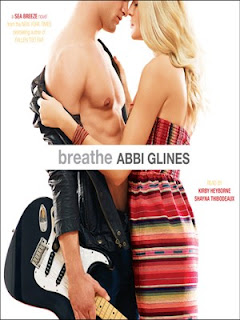 'Sadie White's summer job isn't going to be on the beach life-guarding or working at rental booths like most kids her age. With her single mother's increasing pregnancy and refusal to work, Sadie has to take over her mother's job as a domestic servant for one of the wealthy summer families on a nearby island.

When the family arrives at their summer house getaway, Sadie is surprised to learn that the owner of the house is Jax Stone, one of the hottest teen rockers in the world. If Sadie hadn't spent her life raising her mother and taking care of the house she might have been normal enough to be excited about working for a rock star.

Even though Sadie isn't impressed by Jax's fame, he is drawn to her. Everything about Sadie fascinates Jax but he fights his attraction. Relationships never work in his world and as badly as he wants Sadie, he believes she deserves more. By the end of summer, Jax discovers he can't breathe without Sadie.'

This book was rather cute. I enjoyed reading it, it was an easy read, one of those you know how it's going to end but you enjoy the ride anyway. It's one of those books you can just pick up and read inbetween two heavier reads. Will probably pick up the rest of the series too and squeeze one in here and there.

You will instantly like Sadie. How could you not, even tho it seem she is on her own in this world, living with a mother that has clearly reversed their job and needs looking after herself, Sadie just gets on with things. She is a very strong teenager where most would crumble. Even at her mothers job, as daunting as it seems, she manages to win every ones heart. And not only catches the eye of her new boss Jax, the very hot rockstar, but also her new co worker.

This can only be describes as a Cinderella story. A rich rockstar falling for the girl that doesn't have any money and hasn't been notices at all before this, the girl who spend all her time looking after her mother and their household.

She will soon discover that Jax isn't just your average rockstar and she will find herself falling for him. But will Jax brake her heart in the process?

I should be way to old for this book. But I love it anyway. And why not, there is no love like your first one. So if you like a light read that's cute and full of heart then this is the one for you!