Review: Ever the Hunted by Erin Summerill (A Clash of Kingdoms Novel #1) 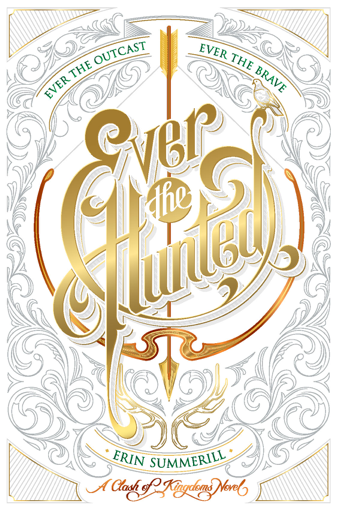 
Now this was fun! I love it when a book is so much fun and this one really did impress me. This book has so many twists and turns that I cant really tell you more about it without spoiling it. So in this case the blurb will have to be enough.


My favourite part about this book is the characters tho. Britta being the main one and also the most interesting. She has grown up with only her father around and Cohen who her father was teaching to track. Alongside Cohen she has learned her fathers skills. When Britta is left to fend for herself she proves how strong and capable she really is. I also love Britta with Cohen, I love the history they have together. It makes for such a interesting reading. A nice change from reading about people meeting for the first time. They have a special kind of bond that will get tested by some very strong accusations.


However this book is a little slow in parts, not quite boring but not really super exciting either. Its really the twists and surprises that make this book a special one. But sometimes that's also ok, between some heavy reads it is nice to have a book that hasn't got so much stuff going on. Which you can just pick up and enjoy without  clearing your schedule.


All in all this has been a fun read that surprised me and left me wanting more. I recommend this to anyone who wants to just put their feet up and enjoy a little escape.


But while the story isn't at its full potential yet I think it has the power to become something great still. I am going ahead and setting my expectations quite high for the next book.

Ever the Hunted will be released on 27th December.

Thank you to NetGalley and the publisher for allowing me to read this book in advance.