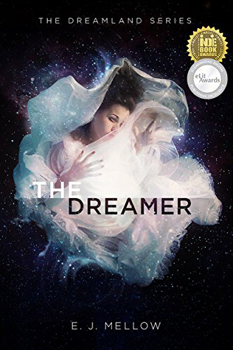 It’s night. Always night. Dreams guard against the evil forged by nightmares. Infinite shooting stars illuminate a moonless sky. A city stands alone, surrounded by a darkened field. On its fringes, a man watches one star separate from the masses and fall. What survives the crash will unveil a secret centuries long hidden.Molly hasn’t slept well since the night of her twenty-fourth birthday. Being struck by lightning might have something to do with it, but then again, her chicken did look a little undercooked at dinner. Whatever the culprit, her life quickly catapults from mundane to insane as, night after night, Molly is transported through her once dreamless sleep to a mysterious land illuminated by shooting stars.

There she meets the captivating but frustrating Dev, and together they discover Molly possesses a power coveted by his people—the ability to conjure almost anything she desires into existence. Seduced by the possibilities of this gift, Molly shifts her attention from waking life toward the man, the magic, and the world found in her dreams.

But Molly must ask herself—does something truly exist if you only see it when you close your eyes?

Faced with the threat of losing everything—her job, best friend, boyfriend, and most importantly, that little thing called her sanity—Molly will learn just how far she’ll go to uncover what is real and what is merely a figment of her imagination.


I wanted to love this one so so much. And I kinda did for most part. But then we got to the end...


This is the first book in a 3 book series and it has been recommended to me. Its the story of Molly who on her birthday, while walking home after a date with her boyfriend, gets hit by lightning. She is lucky, very lucky, other then a burn she is all fine. But Molly who never remembered any of her dreams, suddenly has very vivid ones. Not only that but they continue every time she falls asleep. The dreams feel incredibly real. In her dream world Molly is captivated by Dev who is very much feeling the same about Molly. Soon they discover that Molly has the power to conjure anything she wants and maybe even more. Caught between two worlds and two men, Molly has to face the fact that it may all be more then just a dream.


Sounds amazing? Yes. And in a way a lot of it was. The idea to bring together dream and reality is my favourite part. Its a genre that hasn't really been explored enough, at least not by me. And I very much loved the world that has been created, it makes for a beautiful setting. The zip lines in Molly's dream world make me want to visit it. I want to travel this way, everywhere.


While I really liked Molly, hard working and reliable, with an incredible relationship with her friend. I liked the mysterious dreamy Dev even more. Yum, who doesn't like a book hottie. But I also liked her reality boyfriend. And here is where one of my issues starts, I am not a fan of a book that makes cheating look so good. I just don't approve, no matter how hot the new guy is. I cant help it, it makes me cringe. There is Molly with an amazing boyfriend and someone is about to get hurt. Booo! This is me now moving on and not making a big deal out of this...


Its not my only issue... my main one is the end. I get it, this is a series and there is two more books to come, the story will continue. BUT, why didn't anything happen? Its like this one was just the introduction, I want a finale and maybe a cliff hanger. I felt unsatisfied at the end.


I wanted this book to be so much more. And it really had the potential, I enjoyed the first 2/3 of the book. I will however still read the next one. I have come to like the characters and I want to know what is next in store for Molly and Dev. And most of all for the 'dream world'.