I am so honoured and excited to be part of the Unrivalled Blog tour. When I have been asked to take part I couldn't resist, as a fan of Alyson Noel it was a MUST. Here is my review as part of the ongoing blog tour. #WelcomeToTheParty 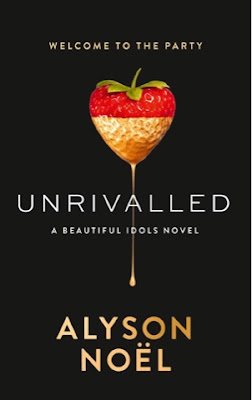 Everyone wants to be someone.

Layla Harrison wants to leave her beach-bum days for digs behind a reporter’s desk. Aster Amirpour wants to scream at the next casting director who tells her “we need ethnic but not your kind of ethnic.” Tommy Phillips dreams of buying a twelve-string guitar and using it to shred his way back into his famous absentee dad’s life.

But Madison Brooks took destiny and made it her bitch a long time ago.

She’s Hollywood’s hottest starlet, and the things she did to become the name on everyone’s lips are merely a stain on the pavement, ground beneath her Louboutin heel.

That is, until Layla, Aster, and Tommy find themselves with a VIP invite to the glamorous and gritty world of Los Angeles’s nightlife and lured into a high-stakes competition where Madison Brooks is the target. Just as their hopes begin to gleam like stars through the California smog, Madison Brooks goes missing. . . . And all of their hopes are blacked out in the haze of their lies.

I was a huge fan of Noel's Evermore series, so you can imagine I have been very happy to hear that there will be a new book. And I needed to get my hands on this. I am not going to lie, the first 20% have been rather slow, but stay with it. This book is a grower. Its as if it gets over the hill and then speeds up faster and faster. Because as you read along it just gets better and better.

The first 20% however only seem slow, because there is so many characters to meet. Ira is rich, famous and intimidating, he owns a chain of nightclubs and designs a competition for promoters. The winner gets not only cash but their dreamjob. The main applicants couldn't be more different and they all have completely different reasons to enter. And not all reasons are straight forward.

Layla wants to be a journalist, she is a blogger already but she wants to go to Journalism School. She enters the competition to find out what happened to Carlos and make this her first story.

Tommy does it to meet and probably impress his father, but also because he is fired from his job and out of money.

Aster enters to escape her very controlling parents, to have the career she wants and not the one that's mapped out for her. She wants to be an actress and make new contacts in the nightclubs.

And then there is Madison Brooks. Hollywoods sweetheart who has more to hide then any of them. She is on top of every vip list and everyone would love to get her into their club to win the competition. But at what price?

This has been getting more and more interesting with every page. The plots started to thicken and the end was just wow. Its the end that truly makes this book fantastic! There is more right? I sure hope so. I think the main characters and even the ones around it have blossomed in the book and I want to read more about them. Not only that but I think they have so much more to give.

Honestly pick this up and stick with it, it will grow on you like it did on me and in the end you will thoroughly enjoy it. Its like the apprentice meets gossip girl!

Glamourous, captivating and thrilling. Most of all completely unpredictable.

Thank you to NetGalley for providing me with a copy in exchange for my honest opinion and for allowing me to be part of this blog tour.

Unrivalled has been released on May 10th.

And you should certainly follow the rest of the Unrivaled blog tour, here are the dates... 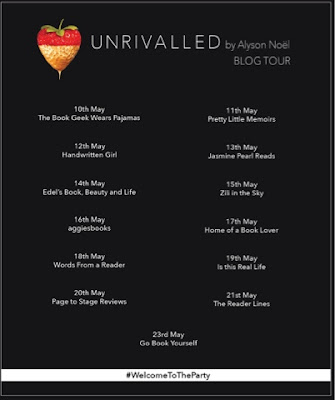