Weekly Wrap Up and Stacking the Shelves #5

The first book I have finished this week is Viral. And my review is up on my blog now! The second book I have finished is Another Love, I really enjoyed that one. So heart breaking, my review will be up on Tuesday. 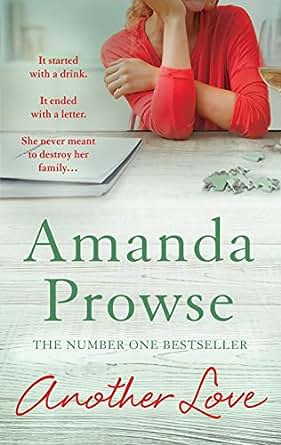 Time to say goodbye is one I haven't finished. And its not because it was a bad book, I just felled it wasn't for me. Not only do I have a 6 year old daughter myself but I also felt like after a few pages I knew where this story is going to end. I felt myself looking interest. Shame. Its not something I do very often, 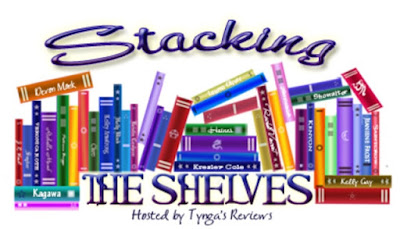 Look at this beauty I have won from Maximumpop and Maximumpopbooks. This book looks beautiful and sounds amazing. Cant wait to read it. 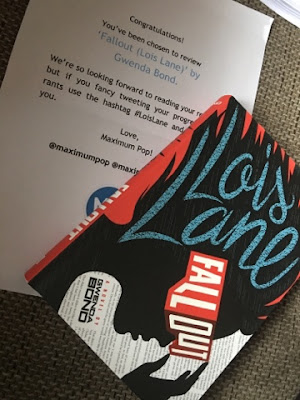 Blurb: Lois Lane is starting a new life in Metropolis. An Army brat, Lois has lived all over—and seen all kinds of things. (Some of them defy explanation, like the near-disaster she witnessed in Kansas in the middle of one night.) But now her family is putting down roots in the big city, and Lois is determined to fit in. Stay quiet. Fly straight. As soon as she steps into her new high school, though, she can see it won’t be that easy. A group known as the Warheads is making life miserable for another girl at school. They’re messing with her mind, somehow, via the high-tech immersive videogame they all play. Not cool. Armed with her wit and her new snazzy job as a reporter, Lois has her sights set on solving this mystery. But sometimes it’s all a bit much. Thank goodness for her maybe-more-than-a friend, a guy she knows only by his screenname, SmallvilleGuy.

Now this has been the most amazing book post!!! OMG so beautiful. It sounds like exactly my thing. I need to squeeze these in asap. Thank you to Lizzie at Headline Books for these three babies. 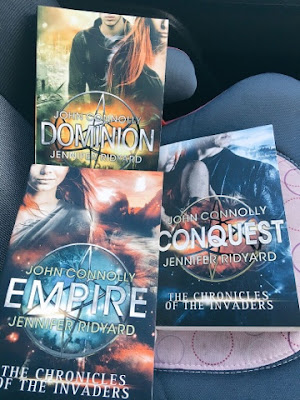 Blurb: The Earth has been invaded by the Illyri, a beautiful, civilized, yet ruthless alien race. Humanity has been conquered, but still it fights the invaders. The Resistance grows stronger, for it is the young people of Earth who are best equipped to battle the Illyri.

Syl Hellais, conceived among the stars, is the oldest alien child on Earth, the first to reach sixteen years of age. Her father rules the planet. Her future is assured. And Syl has hidden gifts, powers that even she does yet fully understand.

But all is not as it seems. The Illyri are at war among themselves, and the sinister Nairene Sisterhood has arrived on Earth, hungry for new blood. When Syl helps a pair of young Resistance fighters to escape execution, she finds herself sentenced to death, pursued by her own kind, and risks breaking the greatest taboo of her race by falling in love with a human.

Now the hunter has become the hunted, the predator become prey.

And as Syl is about to learn, the real invasion has not yet even begun...

Now this is something very exciting for me! My first Graphic Novel. I have always wanted to try one and I will now have my chance. This is so different to anything I have reviewed before but I cant wait. 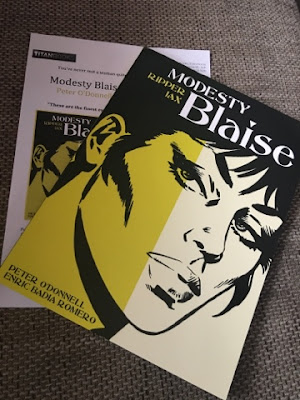 Blurb: Continuing the only complete collection of Modesty Blaise adventures! The return of the 'ass-kicking femme fatale'. Full of classic action and adventure and dripping with ‘60's chic.


Now for the first time ever Net Galley has granted my wish and WOW WOW WOW look at this cover. It's so pretty I think I am in love. So much so I had to start reading this book straight away. Loving it already.

Destined to wind up "wed or dead," Amani’s counting on her sharpshooting skills to get her out of Dustwalk. When she meets Jin, a mysterious and devastatingly handsome foreigner, in a shooting contest, she figures he’s the perfect escape route. But in all her years spent dreaming of leaving home, she never imagined she'd gallop away on a mythical horse, fleeing the murderous Sultan's army, with a fugitive who's wanted for treason. And she'd never have predicted she'd fall in love with him...or that he'd help her unlock the powerful truth of who she really is.
Posted by Aggie at 13:07